Where: CNN and CNN en Espanol

Habitat for Humanity is pleased to share that CNN and CNN en Español will premiere the acclaimed documentary JIMMY CARTER, ROCK & ROLL PRESIDENT this Sunday, Jan. 3, at 9 p.m. EST and PST. Viewers will learn the story of how music played a surprisingly significant role throughout the 39th President’s life and political career and how President Carter forged tight bonds with well-known musicians of all genres.

The film illuminates an era that saw youth culture and politics join forces for change, and offers a revealing look at how President Carter’s love of music is essential to who he is as a father, a citizen, a man of the South and a leader during his presidency and beyond. The program includes contemporary interviews with Bob Dylan, Madeleine Albright, Bono, Rosanne Cash, Willie Nelson, Bishop Michael Curry, Paul Simon, Nile Rodgers, Gregg Allman and others, as well as extended exclusive interviews with President Carter and his son, James ‘Chip’ Carter, III. 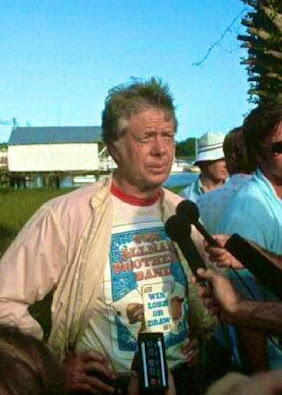 Since 1984, the Carter’s have helped families around the world build simple decent houses through our ministry. They also have helped put housing and our ministry on the national and international stage in ways we could have never accomplished without them. The program provides a glimpse of an era when few people had ever heard of Georgia’s former Governor and his wife and how some of the best-known musicians in the country helped bring attention to the Carters in ways they might have never accomplished without their support.

It was a privilege for Habitat International to be able to help the filmmakers tell this little-known story. When contacted by director Mary Wharton and others involved in creating the documentary, they were happy to provide historical photos and footage from our archives. Also approached were the Carters’ fellow Habitat Humanitarians, Garth Brooks and Trisha Yearwood, and asked them to be interviewed for the documentary.

In addition to airing on CNN and CNN en Español on Sunday, the program will stream live for subscribers via CNNgo and on the CNN mobile apps for iOS and Android, and will be accessible on demand beginning Monday, January 4 on CNN via cable and satellite systems, CNNgo platforms and CNN mobile apps. The film will encore on CNN Saturday, Jan. 9 at 9 pm EST and PST.

Posted by Watauga Habitat for Humanity at December 30, 2020