Who Wants to be THE BIG KAHUNA?

Boone (January 10, 2020)  Do your friends or place of business have what it takes to be crowned “The Big Kahuna”? Watauga County Habitat for Humanity is currently recruiting teams for their 2020 Annual Big Kahuna Campaign.  A Kahuna Team is a group of four community- minded people who volunteer to help raise money for Watauga Habitat’s affordable housing program.  Teams solicit their network of personal and business contacts to donate to Watauga Habitat in their name.
“This will be our 6th Kahuna Campaign,” said Allison Jennings, Director of Development at Watauga Habitat for Humanity.  “In the past, participants have been local, individual ‘movers and shakers’.   This year we are changing things up a bit and recruiting teams instead of individuals.”
This friendly competition kicks off March 2nd, 2020.  At the conclusion of the contest, the results will be announced at a fun social event known as the “Don Ho-Down” on May 15th at Appalachian Mountain Brewery.   At this event, the Kahuna Team raising the most money will be crowned the “BIG KAHUNA”.
Participation is limited and Watauga Habitat is currently looking for teams of four individuals.  “Over the coming weeks, letters will be sent and phone calls will be made to community leaders in an effort to recruit the best Kahuna teams,” said Jennings.  “Look for some former Kahuna contestants teaming up to ‘win the crown’ and new faces that will energize this highly-competitive contest.” The Kahuna campaign will be limited to five teams and a maximum of four participants on each team.
In addition to bragging rights, the winning 2020 Kahuna Team will be featured for one year on Watauga Habitat’s website, a dedicated article in Habitat’s printed annual report and much more.
Ideas for participating teams include organizing and hosting an event during the competition period—for example, hosting a cocktail party for friends, or donating a percent of proceeds from your business.  If a birthday or anniversary falls in that time-period, you can ask friends or family to donate to your campaign.  The ideas are limitless, and the Watauga Habitat staff and Board of Directors will be behind your team all the way, coaching and promoting you all the way!
Since 2015, Watauga Habitat for Humanity’s Kahuna Campaign has collectively raised over $200,000.   Past winners include Linda K. Robinson of Premier Sotheby’s Real Estate, Justin Davis of Town Tavern Blowing Rock, Jenny Miller, Community Volunteer, Crystal Smith of Appalachian Mountain Brewery and Ginny Morgan Walker of Mountain Times Publications.
Those interested in joining the 2020 Watauga Habitat’s Kahuna Campaign should contact Director of Development, Allison Jennings at 828-268-9545 ext. 104 or allison@wataugahabitat.org.  To learn more about Watauga Habitat visit wataugahabitat.org 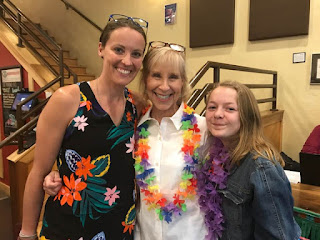 Posted by Watauga Habitat for Humanity at January 10, 2020

Since March 1st, four teams have been competing to see who can raise the most money for Watauga Habitat's affordable homeowner program. ... 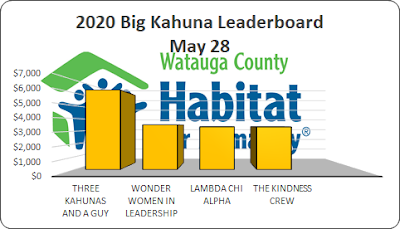